The 6th Trans Pride Week organized by Istanbul LGBTT Solidarity Association concluded with the Trans Pride Parade at the Istiklal Avenue with the participation of thousands. 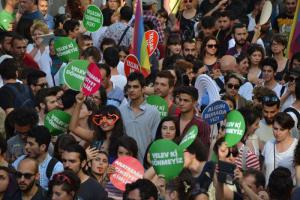 Police barricade against the march

As a result of the police barricade at the Taksim Square, the march started in front of the French Cultural Center. Police did not allow the crowd through Istiklal Avenue, using the [anti-imperialist, anti-capitalist] Allied June…